May 2011: Actions against Frontex

Blockade of the entrance to the closed detention centre

Demonstration at Brussels Airport and at the entrance of the closed detention centre against collective expulsion by the EU agency Frontex: At Brussels Airport  60 people protested against the collective expulsion of 61 Nigerians and Congolese by Frontex, the European Agency for management of the external borders. The deportees are 9 Nigerians and 3 Congolese who are in detention centers in Belgium and 49 from Great Britain, Germany, France, Switserland, Poland, Sweden and Norway.

The demonstrators are protesting against what they called a “flight of shame”: “Belgium hires for this collective expulsion a full Airbus plane, which will depart from the military airport of Melsbroek. It was seven years ago that Belgium rented such a big plane to send asylum seekers collectively back to their country. This way Belgium cooperates with the European anti-immigration politics. We must protest against this in every possible way.”

The protesters are demanding a radically different European migration policy and the closure of all detention centers for refugees. According to them, people there are illegally detained without any legal assistance, while they often have committed no crime at all. The demonstrators took their protest message first in the departure lounge and then into the airport arrival hall. That went on a noisy but orderly manner so that no incidents occurred.

Furthermore, there were again protests at Warsaw, where the Frontex headquarter is located.

Posted in Uncategorized | Comments Off on May 2011: Actions against Frontex

There cannot be democracy without global freedom of movement

The dynamic of the Arab spring is emanating into the entire world. The movements of revolt in the Maghreb encourage and give hope, not only because despotic regimes that have been believed invincible were chased away. Although the direction of further developments remain open it is obvious that the domino effect of the Tunisian jasmine revolution swiftly brought back the old insight that history is driven from below. The struggles are directed against the day-to-day poverty as well as against general oppression, they are as much about better living conditions as they are about dignity, in short: “bread and roses”.

END_OF_DOCUMENT_TOKEN_TO_BE_REPLACED

Posted in Uncategorized | Comments Off on Freedom, not Frontex

WARSAW, February 14—The Agency is aware of the migratory situation in Lampedusa and is monitoring it closely via the Frontex Operational Office (FOO) in Piraeus, Greece. Two Frontex staff members have been dispatched from the FOO to Lampedusa to liaise with local authorities and monitor the situation on the ground. As of Monday February 14, Frontex has not received a formal request for assistance from the Italian Government, however, the Warsaw HQ is ready to take action and is preparing an appropriate operational response in the event of it being requested.  Frontex senior management is also in close contact with the relevant authorities at the European Commission.

Why On the Borders of Legality: Frontex Forces Should Stop Filling Greek Jails with Asylum Seekers

Statement by Simone Toller (researcher of “Human Rights Watch”) which was published in “Süddeutsche Zeitung” (a big German Newspaper):

The European Court of Human Rights ruled last week that Belgium had violated the rights of an Afghan asylum seeker when it returned him to Greece, finding that the conditions in which he was held were inhuman and degrading. Germany had announced a few days earlier that it was suspending returns of asylum seekers to Greece for a year to give Greece time to “improve conditions.” Yet, border police from several EU countries, including Germany, are deployed to the Greek-Turkish border, where they transport migrants in windowless vans to these same degrading and inhuman conditions in Greek detention centers.

END_OF_DOCUMENT_TOKEN_TO_BE_REPLACED

Posted in Uncategorized | Comments Off on Why On the Borders of Legality: Frontex Forces Should Stop Filling Greek Jails with Asylum Seekers

Frontexplode in Mali and Senegal 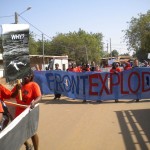 Last days the Afrique-Europe-Interact-caravan went from the malian capital to the mauretanian border. Find reports in the News-section of the projects homepage.

Many of the new posters and flyers against Frontex have been distributed in these days in Bamako, Nioro and Gogui, the long frontexplode-banner was present everytime and stickers with „Abolir Frontex“ could be found (not only) at the plates near the borderpost to Mauretania.
END_OF_DOCUMENT_TOKEN_TO_BE_REPLACED

Posted in Uncategorized | Comments Off on Frontexplode in Mali and Senegal

From February 6th to 11th, 2011 the 11th World Social Forum will take place in Dakar, the Senegalese capital. This is why from mid-January bus and car caravans will start their journey to Dakar from several places in Africa.

One of those caravans is the ‘WSF Citizens’ Caravan for Freedom of Movement and Equitable Development’, which will begin in Bamako. It expects 200 to 400 participants mainly from African (especially West African) countries. There will be several actions, for example against the EU’s border protection agency Frontex and illegal deportations from Mauretania to Mali, which are sponsored by the EU (read more about the Caravan).

To support the actions, the Frontexplode-Campaign printed posters and flyers.

Posted in Uncategorized | Comments Off on Bamako-Dakar Caravan

Confrontation against Frontex and head of European Council

On Jan. 17, on the 97th World Day of Migrants and Refugees, a conference on migration policy was held at the Kazimierowski Palace featuring keynote speakers Ilkka Laitinen, Executive Director of Frontex and former British Home Secretary Charles Clarke and attended by various Eurocrats and migrant hunters.  Although we found out about this only at the last minute, some people from ZSP and RAS (Radical Solidarity Action) were able to get into the closed conference and made an extended confrontation.

Article of the German magazin “Spiegel”: Shutting the Back Door to Fortress Europe

Although we don´t share the opinion of the authors concerning the role of the “traffickers”, this article gives a good overview about the situation in Evros region:

Greece wants to erect a fence on its border with Turkey to stop illegal immigrants from crossing into the EU. But the ruthless people traffickers in Turkey will do whatever it takes to get those dreaming of a better life into Europe – no matter what the danger to the immigrants.

Posted in Uncategorized | Comments Off on Article of the German magazin “Spiegel”: Shutting the Back Door to Fortress Europe

What should we say? We are missing words, that you guys seem to be so proud of your operation that you even publish videos of your hunting. However, the target cross makes things easier for you?

Posted in Uncategorized | Comments Off on Frontex Rabit-Operation in Evros: Watch the migrant-hunting of Frontex 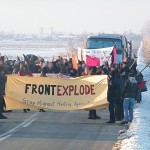 On December 18 a mobilisation was organized at the Evros region. Early on the afternoon there was a protest outside the Fylakio detention centre and later a demonstration in Orestiada, where the Frontex headquarters are located.