8.6.2008: Protest at Frontex Headquarters in Warsaw 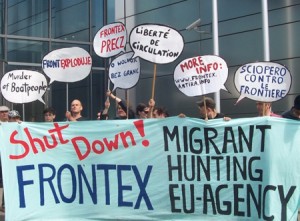 Activists from many different countries came to Warsaw to protest against the deadly policies of Frontex, the EU agency which conducts migrant hunting operations, trains border guards and special units to hunt down people crossing so-called “national borders” and which helps to coordinate and implement EU immigration policy. Frontex has its headquarters in Warsaw.

On June 5, the second of two transnational conferences took place. The conference was opened by Laure Akai with presentations by Amadou Mbow, a human rights activist from Mauretania, Devi Sachetti from Italy, who deals with issues of migrant rights, including the issue of precarity and migrant labour, Vincent de Jong from Holland, who is active in resistance against detention and deportation in Holland, Georgios Maniatis from Greece and Hagen Kopp from Germany. The speakers presented information about the Frontex operations near the coast of Africa and their consequences, the operations in Libya and the Mediterraen and Agean Seas as well as an overview of Frontex operations, the ideology behind this and our arguments against this regime. It was 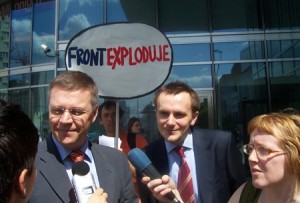 pointed out during the presentations and later discussions how destructive these policies are and how the migrants can be victimized twice – for example, by the practices of some businesses which undermine their traditional livelihoods at home and then by the policies of the countries these businesses tend to come from, which seek to exclude people.

On June 6, a demonstration was held in front of Frontex headquarters. People from many countries were present, people from various social movements, some refugees living in Poland as well. The protestors demand that Frontex be shut down and that freedom of movement should be given to all, that there be an end to descrimination of all sorts against immigrants. The sleazy head of Frontex, Ilkka Laitinen, came out to try to assure the press that he’s a nice, decent guy who’s just doing his job, which most people agree with. He invited some people in to speak with him but, just like any two-faced, teflon politician, he tried to deflect all criticism by using Eichmann’s defense and pretended to not know anything about migrants suffering because of Frontex’s work. He asked people to please inform people should they hear of any problems. As if the fact that people came thousands of miles to protest was no indication that something was going wrong. 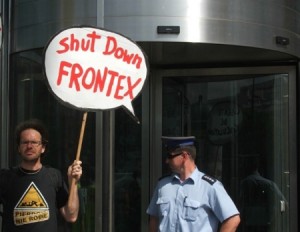 The protestors made some speeches and had many slogans against borders in general, against deportation, against Frontex, etc. Afterwards, a demonstration was held. People went to the Presidential Palace to protest Poland’s immigration policies, in particular it’s agreement with the Vietnamese government to deport 5000 Vietnamese people. The Polish border police, along with Vietnamese security forces, carried out a number of raids recently in which Vietnamese people were beaten, detained and deported. This government agreement has driven many of Poland’s Vietnamese (70,000 people in Warsaw) underground.

Afterwards activists met and agreed to continue working on this issue, to make the issue more known and to provide a deeper analysis of the processes, including appeals to working class people not to be fooled by the divisive ideology of the statists and capitalists which pits working people against each other. 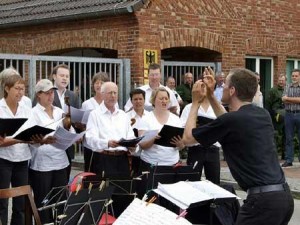 The Federal-Police-academy near Lübeck is responsible for schooling and training of Frontex-Units in Germany. That´s why, 550 people from the noborercamp in Hamburg were protesting in front of the academy. During this action, the gate was blocked for some time by a classical concert. In the afternoon, a powerful demonstration was held in the city of Lübeck.


Around six o’clock, activists gathered at the infopoint of the noborercamp in the city. Suddenly, people with around 40 small rubber boats appeared and entered the harbour. The coastguard was present with one large boat and two smaller, but powerful boats. As the noborder boats started to group, the coast guard immediately approached and started to attack the noborders in their usual way: circling at close range with their powerful engines, creating waves so that the boats would capsize. This was actually quite a stupidity, since they proved to everybody watching that this is indeed their everyday business: drowning people at sea, and they seemed to have quite a routine in that.

The activists however were not to be stopped by such a foolish behaviour and started to drive the coast guard boats out of the harbour. A smaller group went into t

he offensive and started to block the harbour in the area of the coast guard, while the other boats displayed a giant banner reading “Frontex Kills”. At that moment, one of the large ferries left the nearby port, and people were happy to note that it also carried an even more giant banner with the same message.

At that point, a demonstration formed and started to also move to the coast guard’s area to support the boats. On the other side, at the mole, also a group of activists gathered and display a banner against Frontex, denouncing it as the “EU migrant hunting agency”. Also at the side of the infopoint, some very large banners in different languages were displayed.

As everybody gathered, the action boats confronted the coast guards. Some were throwing paint, while another group managed to liberate a 10m-boat that had been seized by the coast guard. It was immediately labelled with “murderers” and brought to the other boats, to the joy of everybody. After some time and more actions, the boats retreated and the activists left the water. The demonstration returned to the infopoint, were everybody gathered.

There was another aggression by the coast guard: They attacked one boat of ours that was coming from a different point with an engine. They approached fast, and immediately put a large cut into the hull with a harpoon-like device, making it sink. They did this in such a routine way, with such precision that it was a very scary demonstration of their everyday crimes at sea.